Skip to Main Content
It looks like you're using Internet Explorer 11 or older. This website works best with modern browsers such as the latest versions of Chrome, Firefox, Safari, and Edge. If you continue with this browser, you may see unexpected results.

This guide was created in support of the St. Kate's Reads program held on March 31, 2022: a discussion of The Fierce Life of Grace Holmes Carlson: Catholic, Socialist, Feminist, led by author Donna T. Haverty-Stacke. This program was a collaboration between the Center for Women, St. Kate's Archives, and Alumni Relations. If you missed this program, watch the recording!

Learn more about Grace Carlson by exploring the resources in this guide, which includes scanned versions of documents from the St. Kate's Archives. Check out Haverty-Stacke's excellent book from the library! 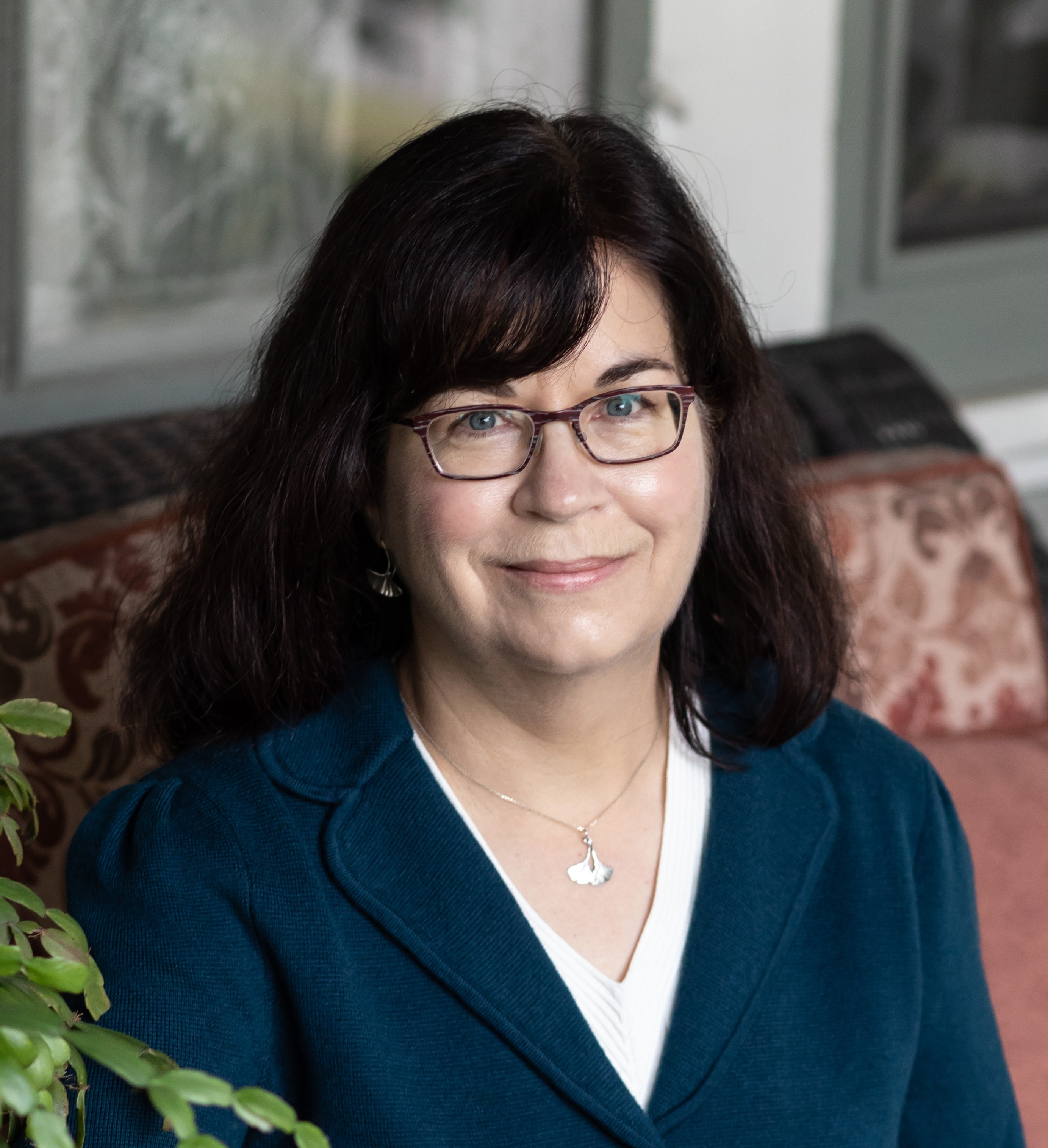 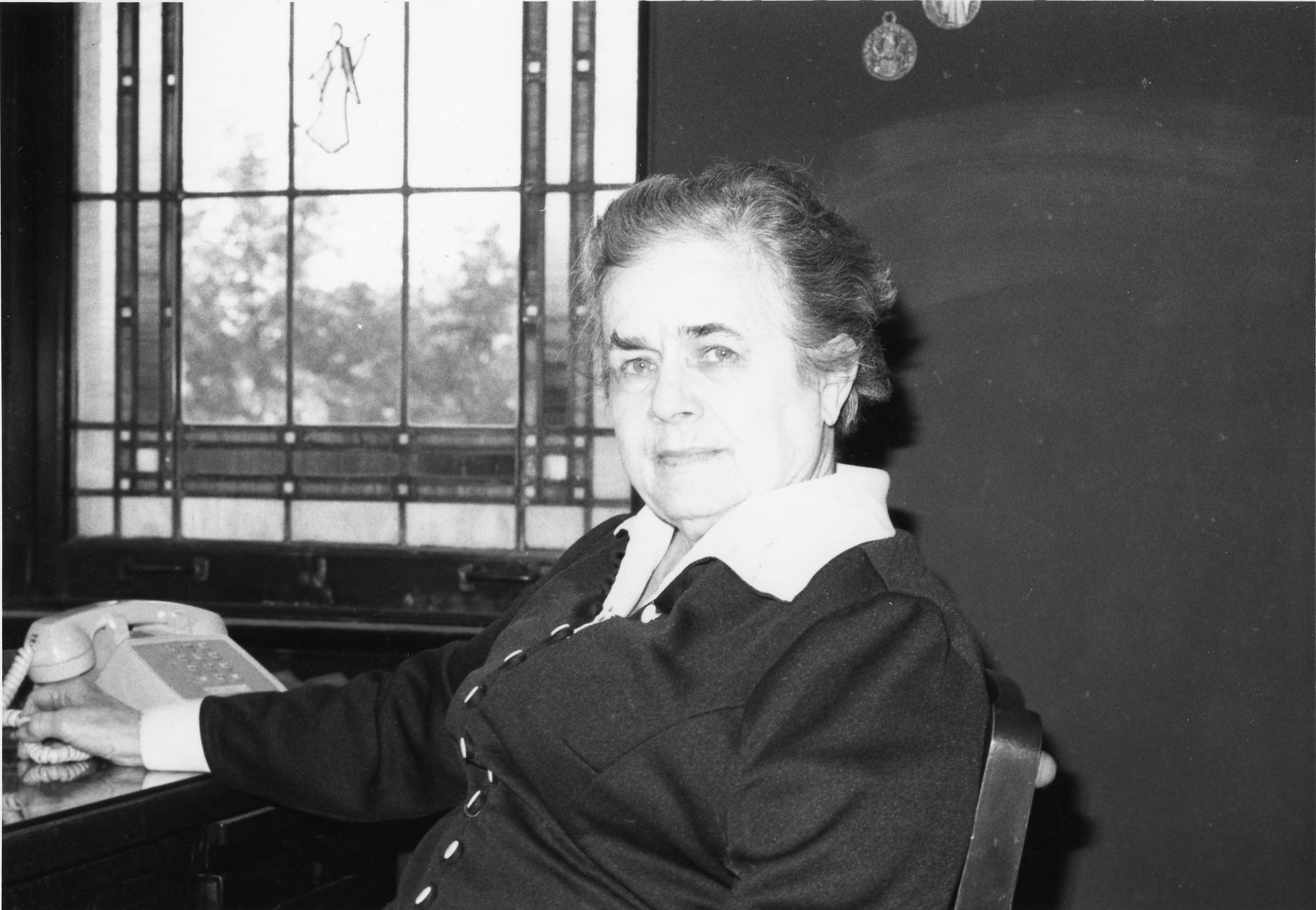 Dr. Grace Holmes Carlson (1906-1992) was a 1929 graduate of the College of St. Catherine and earned a Ph.D. in psychology at the University of Minnesota. She was later a beloved teacher and administrator of St. Mary’s Junior College, which became the Minneapolis campus of St. Catherine University. She was also an activist who served a prison term, a leader in the Socialist Workers Party, and an ardent Catholic. Read on for her fascinating story!

Grace the activist and politician 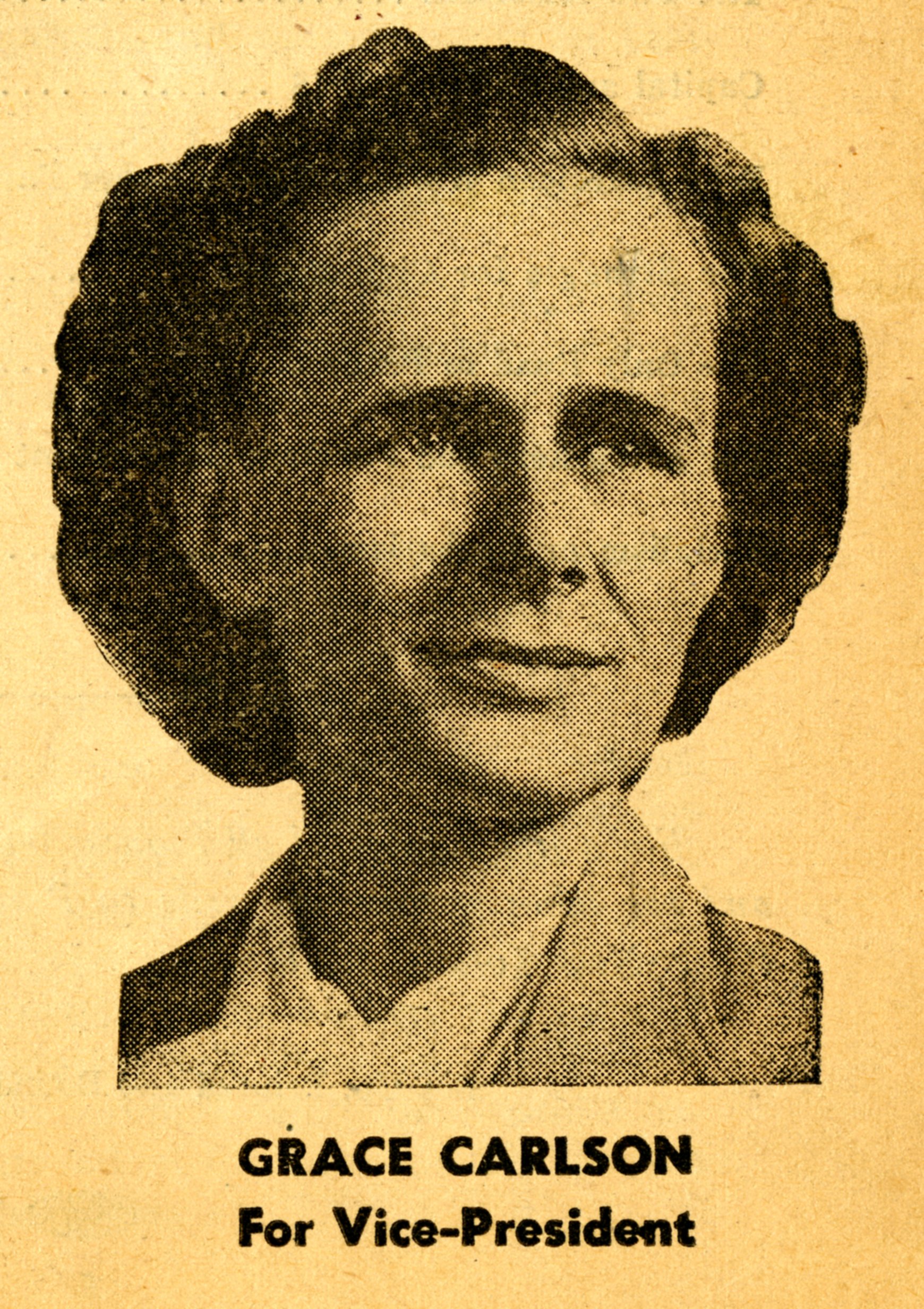 From humble working-class beginnings in the Frogtown neighborhood of St. Paul, Carlson went on to run for Vice President of the United States on the Socialist Workers Party ticket in 1948. She was the first female vice-presidential candidate from a major political party. She was also a fierce advocate for organized labor, civil rights, and other social justice issues her entire life. 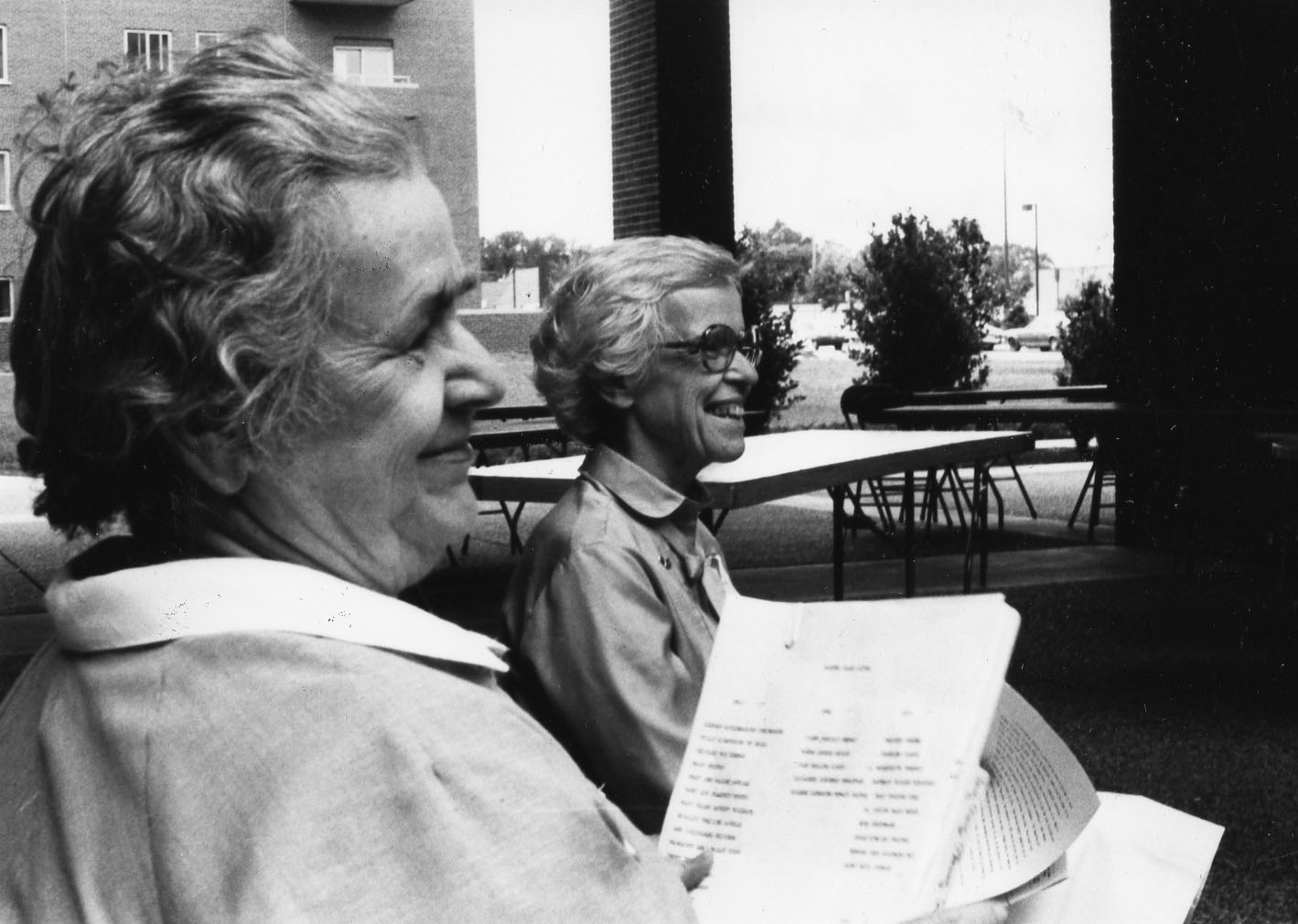 In 1952, influenced by the Sisters of St. Joseph who had educated her, Carlson made a much-publicized departure from the Socialist Workers Party in order to return to the Catholic Church.

Grace the teacher: "Nothing is too good for the student" 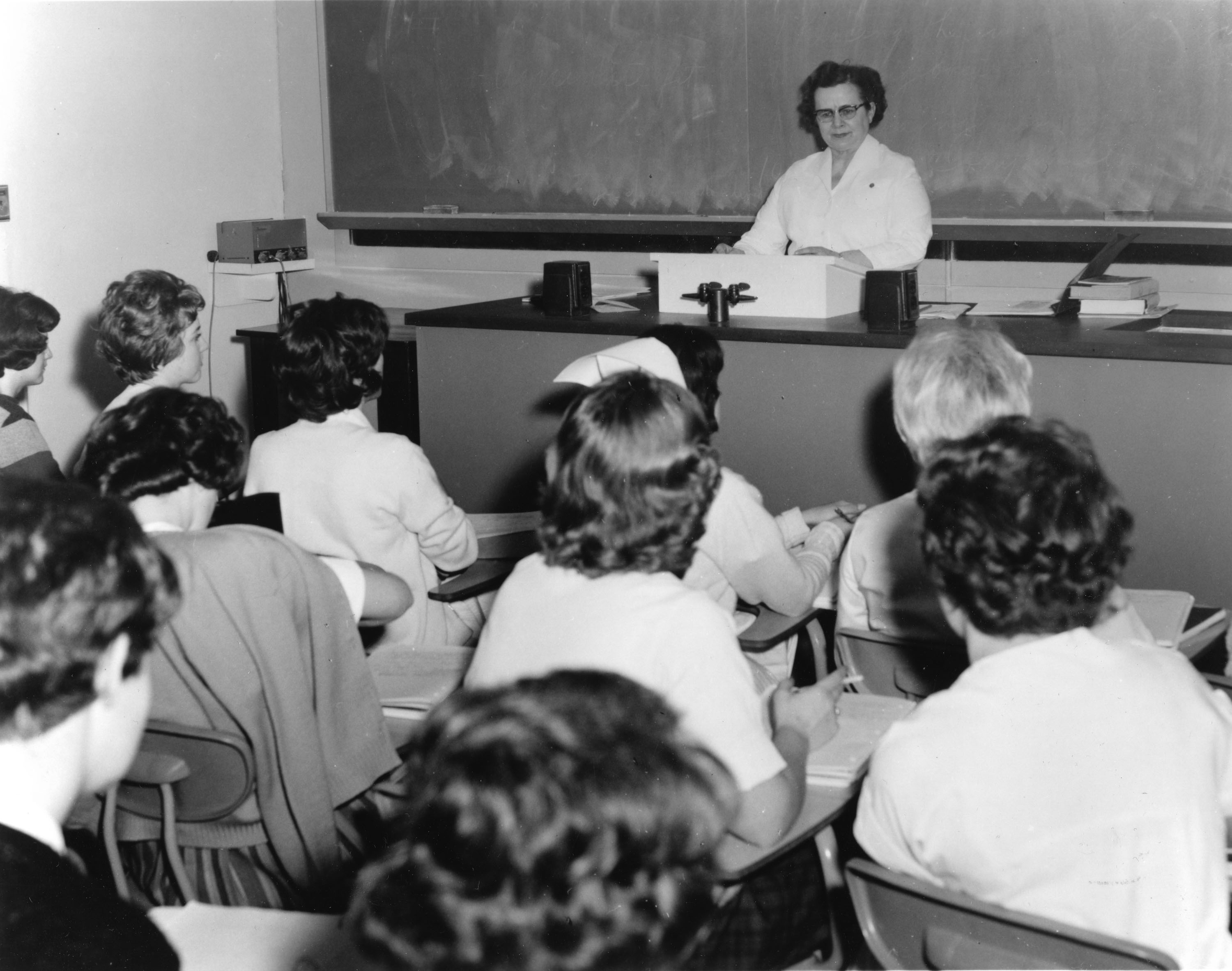 In 1955, Grace began teaching psychology at St. Mary's School of Nursing, where she was also director of student social activities. When the school became St. Mary's Junior College in 1964, she played an important role in designing the new curriculum. She was a strong promoter of SMJC, and her support continued even after her retirement in 1979. For example, she contributed a column to Good News (the SMJC newsletter) titled "Carlson's Continuing Commentary," in which she highlighted the good work of people from the SMJC community. In 1982, she donated money to create an emergency loan fund, so that students in financial crisis could continue their education. Going the extra mile to help students succeed was typical of Grace Carlson.

Carlson, dressed in white uniform during her days as an instructor at St. Mary's School of Nursing

Grace remembered after her death 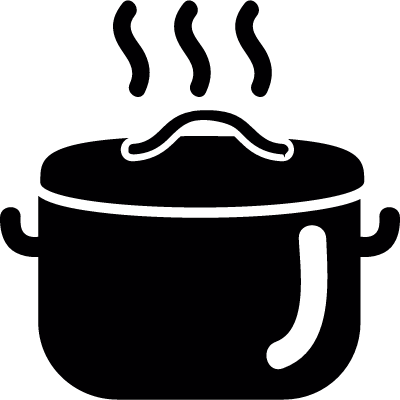 Grace Carlson was known for her hospitality and cooking. Her recipes were compiled into two cookbooks that were sold as fundraisers for St. Mary's Junior College. 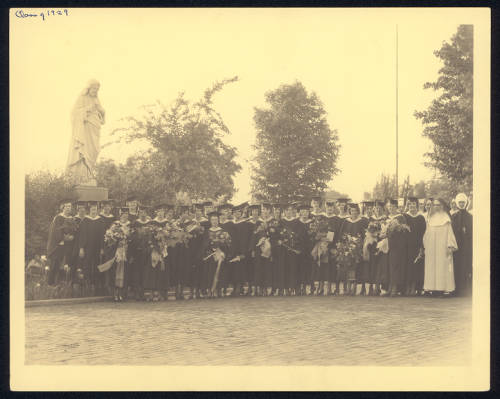 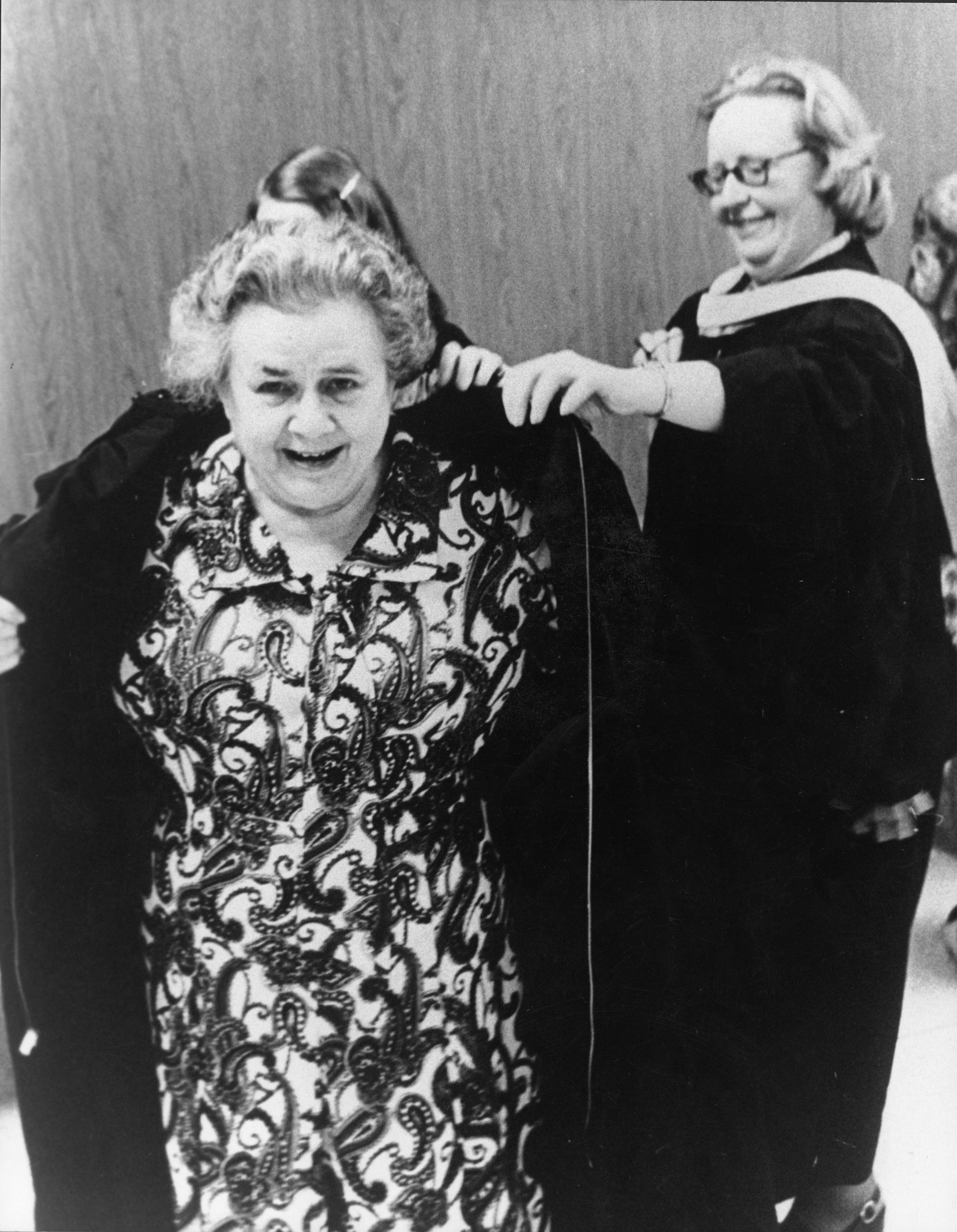 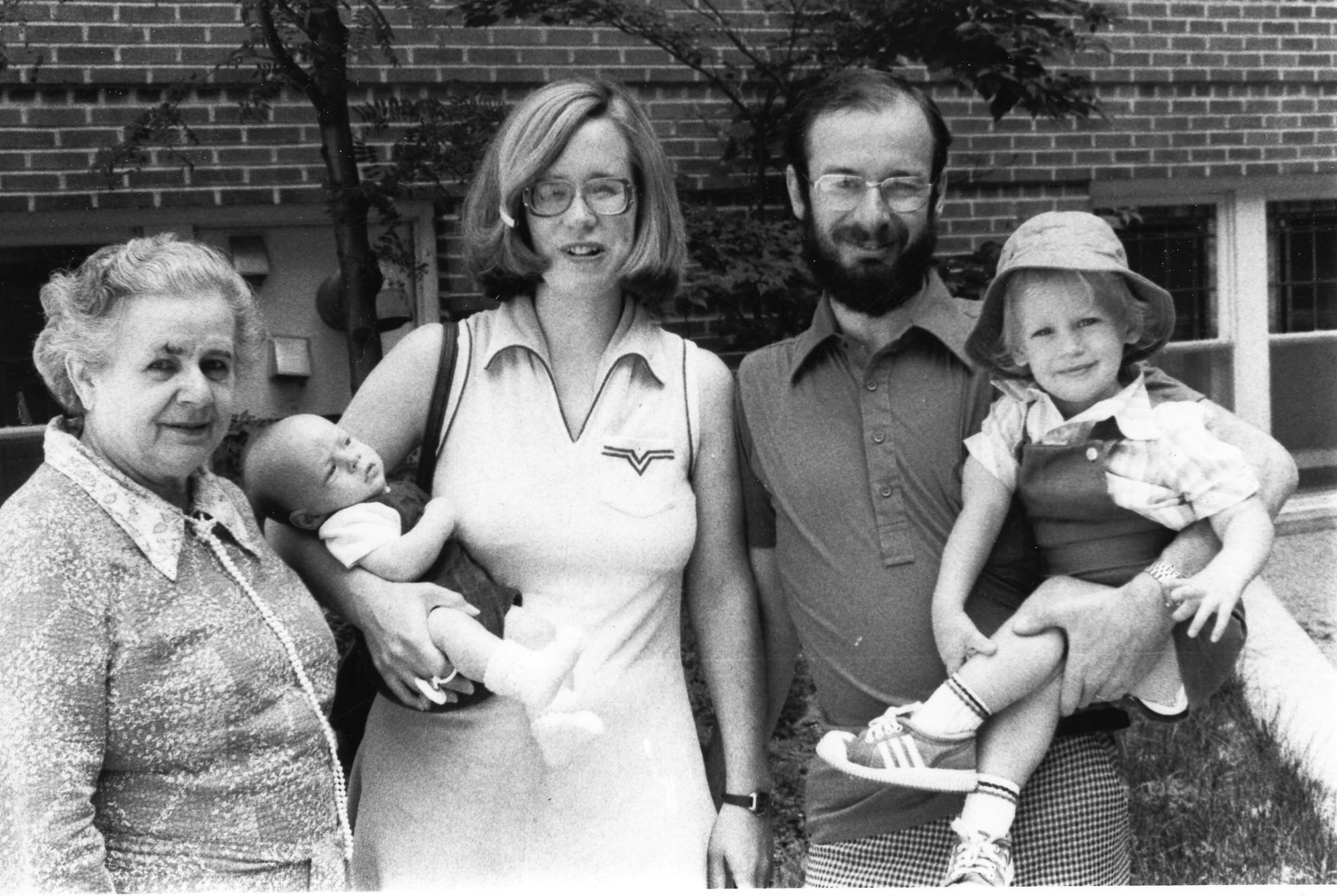 Grace Carlson with an SMJC alumna and her family who were visiting from South Africa, 1979 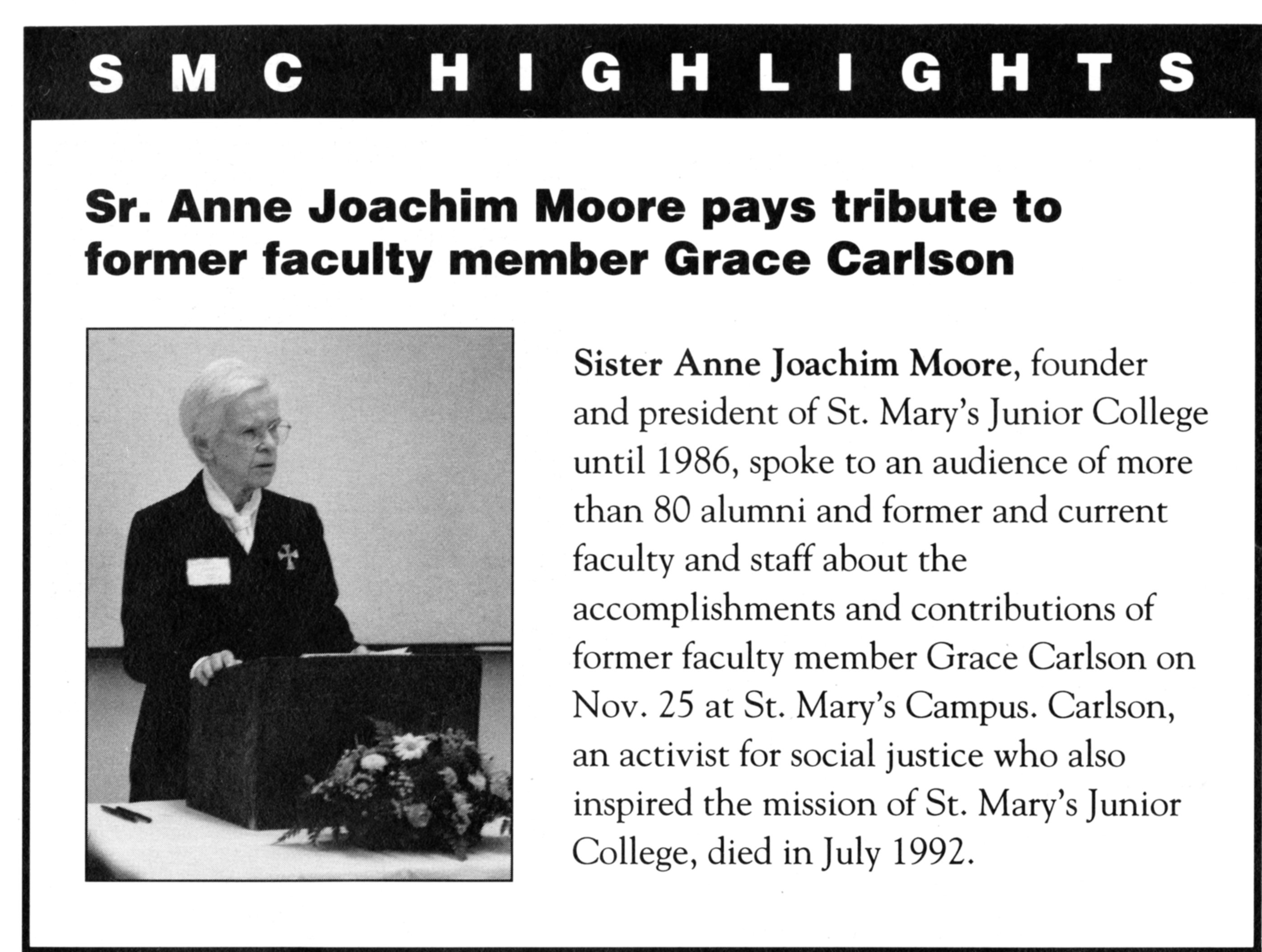 This work is licensed under a Creative Commons Attribution-NonCommercial-ShareAlike 4.0 International License